Be Silent, and Come Out of Them

The authority of Jesus drives out evil—and Jesus has shared that authority with all baptized Christians. 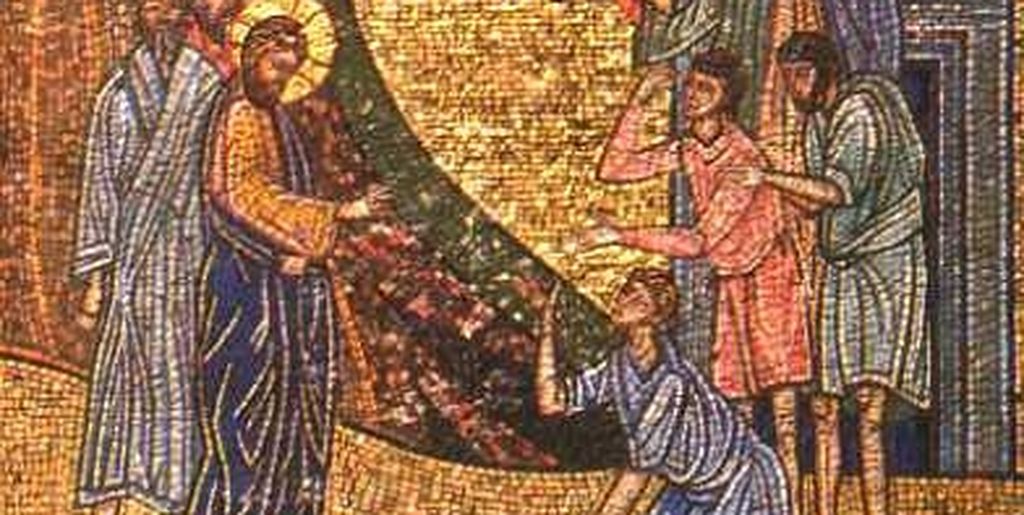 I’ll confess: whenever I hear these stories of Jesus casting out unclean spirits, something in me feels ever so slightly skeptical.

We live in an age of science.

We live in a world of advanced technology.

We can send people to the moon. We can plumb the depths of the ocean. We can split atoms, cure diseases, communicate instantaneously across thousands of miles.

Surely we’re not so foolish as to believe in unclean spirits. Surely we’ve advanced well beyond that.

And, indeed, many of our contemporary western compatriots find these stories a little…embarrassing. Maybe sometimes we feel as if we have to apologize for them, weasel out of them.

Like: Ooof, if only Jesus had had access to the DSM-5. Then he would have known that there aren’t honest-to-gosh demons but “mental illnesses” and “mood disorders.” But fortunately, we know better. We know now, from our enlightened scientific vantage point, that we don’t have to resort to abracadabras and presto-change-os. There aren’t unclean spirits. There are problems that are easily handled with therapy, mindfulness meditation, and anti-anxiety medication.

I am someone who has benefited greatly from therapy, mindfulness meditation, and anti-anxiety medication. I’m a HUGE advocate of such things. This is something I talk about openly, because there are stigmas around mental health in our culture, and there shouldn’t be. Being depressed, being anxious, or having any number of mental health concerns isn’t something we need to be ashamed of. It’s not something we need to hide or pretend doesn’t exist. It’s something many, many people deal with, and it’s good and healthy to say so out loud.

Which is why I actually don’t think that’s what’s going on in these difficult-to-explain stories.

It’s far too easy to attempt to map this phenomenon onto categories we understand in our post-enlightenment, scientific, western world and say, “Ah, well that’s clearly what that was.”

When, in fact, I think the real answer is infinitely deeper, infinitely more challenging.

In Ephesians 6, Paul tells us: “For our struggle is not against flesh and blood, but against the rulers, against the authorities, against the powers of this world’s darkness, and against the spiritual forces of evil in the heavenly realms.”

Here Paul is telling us that we are engaged in a cosmic struggle. There are spiritual forces beyond our bodies, beyond the earth, that seek for evil and are enemies to God.

Again, this sounds foreign to modern ears, but that’s all the more reason to give it a hearing. It’s too easy to dismiss, to ignore. And maybe that’s part of the point. There’s a quote generally attributed to French writer Charles Baudelaire: “The greatest trick the Devil ever pulled was convincing the world he didn’t exist.”

In our text this morning, we’re being challenged to open our eyes. To go beyond our murky skepticism. To recognize the conundrum in which we find ourselves.

Are you still having trouble seeing it?

Let’s try another passage from Paul, this one Romans 7. “I do not understand what I do!” he says. “For what I want to do I do not do, but what I hate I do.”

Does this sound familiar? Can you relate to it?

Hear his words! Recognize the struggle!

Who hasn’t been there? Who hasn’t had the experience of wanting to do good but being incapable of doing so?

It’s easy to say, “Oh, that was back then, we know better now; there are no unclean spirits or evil forces anymore,” but isn’t it hard to understand what you do sometimes? Aren’t there times when you do what you hate, instead of what you want to do?

I think when we’re honest, we realize that we are far more familiar with these unclean spirits than we want to let on.

At least I am. And I am weary. After this past year, I feel like I have seen unclean spirits everywhere.

I’m sure it has to do with the pandemic, with the way we’re all isolated and exhausted and at the end of ropes, but it’s been shocking to behold.

I’ve seen it in the video of a black man’s breath being choked out of him over an agonizing eight minutes and forty-six seconds of blatant disregard for human life.

I’ve seen it in the streets of my own neighborhood, in the armored trucks that were stationed at my child’s elementary school this summer, at the shops and stores that burned to the ground.

I’ve seen it in foolish, useless, unnecessary arguments between friends and family members, that are never about what we pretend they’re about, but are always about the grief and pain of feeling unheard, unappreciated, unloved—although it seems we’re always too proud and too afraid to admit as much.

This year has shown us things we did not want to see.

But now that we’ve seen it…now that we can no longer pretend the devil doesn’t exist…What is our recourse? When everything we do seems only to compound the problem? When we do what we hate, despite ourselves?

In the passage in Mark, the unclean spirits cry out to Jesus, “What have you to do with us, Jesus of Nazareth? Have you come to destroy us? I know who you are, the Holy One of God!”

You see, we do to Jesus what we do to everyone else.

We build up walls.

We get angry and defensive.

We cut people off.

We refuse to listen.

Even when we know it will make us feel guilty and ashamed and miserable.

The sin that lives in us does it. For what we want to do we do not do, but what we hate we do.

But Jesus…Jesus…Jesus comes closer to us. Jesus doesn’t leave. Jesus doesn’t let something like the flimsy wall we’ve built around our heart keep him out. Jesus puts his hands on us. Jesus rebukes the unclean spirits and the sin that lives in us, and says, “BE SILENT, AND COME OUT OF THEM!”

I wish I could say that doesn’t hurt. But it does hurt. It hurts like hell. I mean that literally, it hurts like hell working its way out of us. The breaking down of our sin, the replacing of our lies with God’s truth, the victory of the love and holiness of Jesus of Nazareth over the powers and principalities of this world—there is a reason Paul refers to it as STRUGGLE.

When the unclean spirit goes, it convulses and cries, the agony of falsehood being destroyed.

And yet, this is the authority that Jesus has been given—authority over every sin, every falsehood, every demon and unclean spirit.

And somehow, in his great mercy and wisdom, Jesus has decided to share that authority with us.

With you and me. With all baptized Christians.

Let me give you an example of how it works, from my own life.

A few weeks ago, I was upset with myself for being unkind toward someone I love. I apologized to them, but I still felt sorrowful and ashamed. So I called a dear friend of mine, who has become a confessor. I admitted what I had done. I expressed that I needed God’s forgiveness.

She heard my confession, then replied: “By the authority of Jesus Christ, I therefore declare to you the entire forgiveness of all your sins, in the name of the Father, and of the Son, and of the Holy Spirit, amen.”

In an instant I felt the shame lift out of me, the unclean spirit leave. I knew I was forgiven.

In our baptism into Christ Jesus, we have all been given this authority. But here’s the catch: we cannot do it for ourselves.

The authority we have, so that even the unclean spirits obey us, is to be expended on behalf of others.

People of God, the church is not a social club. It’s not a neighborhood organization or a fellowship or a group of good people doing service projects together—at least not primarily.

The church is a community of freed and forgiven sinners, who have been given the authority to free and forgive one another over and over again.

Like Jesus did, we are called to move closer to the ones in pain, and cry out, “BE SILENT, AND COME OUT OF THEM!”

This is not something we can hoard. It is for everyone. It is done in the name of Jesus Christ, our Lord, so that there can be forgiveness and reconciled relationships and truth.

I want you to know, today, right here, right now, that there is nothing you have done or have left undone that is beyond the grasp of the divine mercy of Jesus Christ. Whatever demons are tormenting you…whatever sin is living in you…whatever unclean spirits are troubling you…receive this word:

Be silent, and come out of them. By the authority of Jesus Christ, I therefore declare to you the entire forgiveness of all your sins, in the name of the Father, and of the Son, and of the Holy Spirit, amen.

Now that you have received it, go—go and share that word with everyone you meet.