Just because we don't call our idols "gods" doesn't mean we aren't worshipping them. 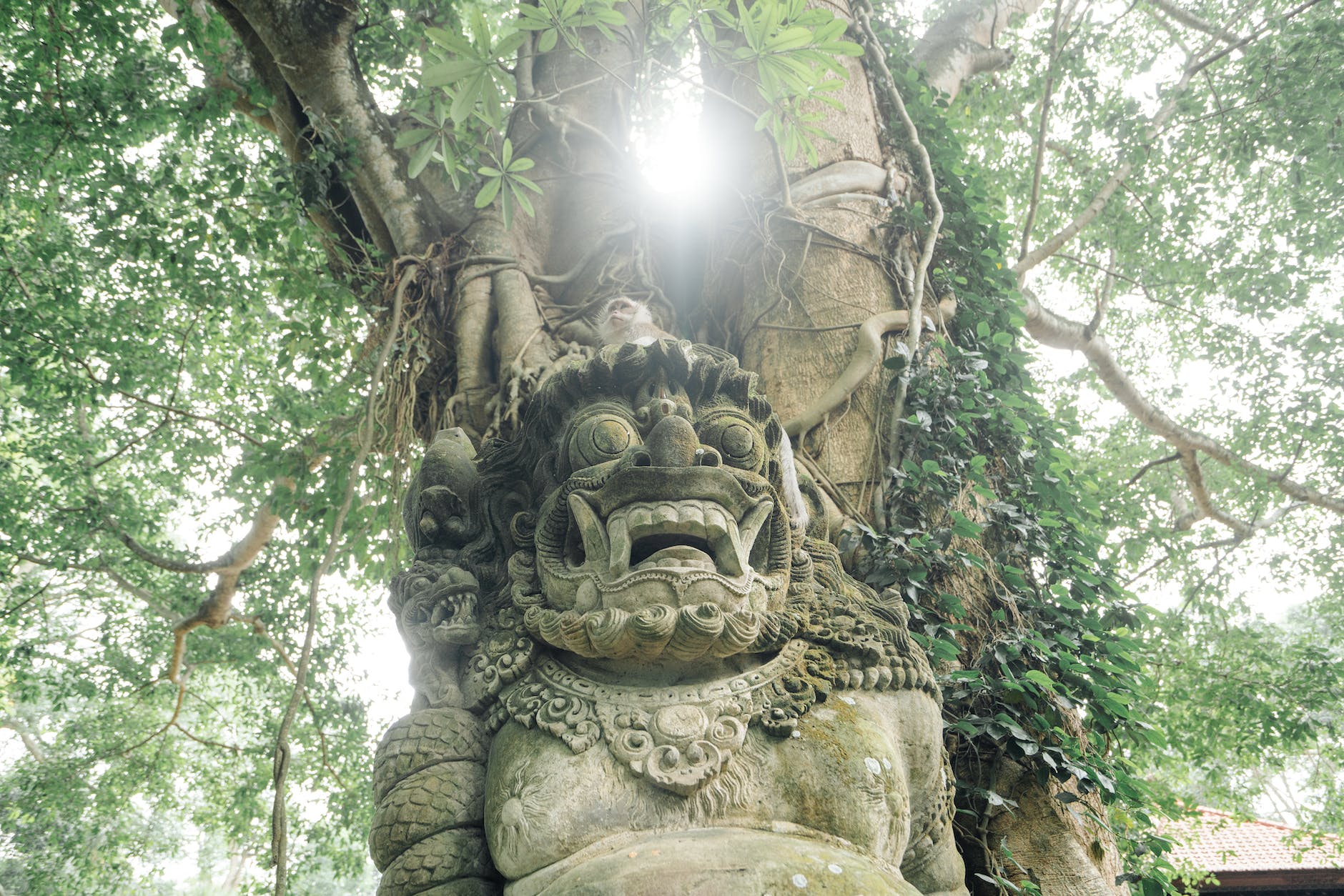 Let’s review where we’ve been so far in our story: God chose Abraham’s family as God’s chosen people, so that they could bless the entire world. As part of God’s promises to Abraham, God promised Abraham’s descendants a land of their own.

Of course, it took plenty of time to get there! First, they were enslaved in Egypt, so God had to deliver them through the Red Sea. Then, God gave the commandments to help the people learn right relationship between God and each other – which the people promptly broke, and spent 40 years wandering in the desert, whining and complaining.

Today’s reading is from Joshua, which tells a sometimes-harrowing story of God finally delivering the promised land to the people. Moses dies before the people can enter the promised land, and Joshua leads them to surround the walls of Jericho and they march around until the walls come a-tumblin’ down. Remember that song?

Anyway, so here we are. The people have seen amazing things. God has delivered on God’s promises again and again and again. And Joshua is trying to remind the people of this.

Because the story Joshua tells here is of God’s unfailing faithfulness to the people…and of the people’s inevitable faithlessness to God!

I will be their God.

Of course, God is God of everything, creator of heaven and earth. But here God is promising a special relationship with Israel; an intimate relationship that is distinct from his relationship with the rest of the world—one that, if you remember my sermon from a couple of weeks back, we Gentiles have also been grafted into through Jesus.

But oh, how tempted the people were by idolatry!

Now, it can be easy, from our 21st century, western vantage point, in which Christianity has been the default religious culture for centuries (though this is changing), to find the allure of other gods kind of quaint. We look at the past, at the worship of statues or mythological beings like Zeus or Baal, and we think, Who in their right mind would have really believed that?

But reading the Bible is a cross-cultural experience, in which we get to practice imagination and empathy for other people in another time and place. So I want to invite you to imagine what it might have been like for them, long before there was modern science or the European enlightenment or the separation of church and state.

In the cultures around Israel, there was a genuine belief that there were lots and lots of different gods that did lots and lots of different things. Some gods controlled the weather—sun gods, rain gods, sky gods. Some gods were particularly devoted to a particular tribe, nation, or empire, not unlike the LORD to Israel, and it was believed that in order for the nation to prosper, the people had to worship these gods properly.

Note that the idea that there was a public secular life and a private religious life did not exist. There was no sphere in which the worship of the gods was a wholly private affair, no context in which you might say, “I’m sorry, but it’s very inappropriate to bring up religion at work.” Religious devotion was built into the fabric of these societies and the worship of these various deities was central to everyday life.

This means that for the ancient Israelites, the question of which god they would worship was an important one, with profound implications for their everyday lives.

It was about their whole life, their entire identity, from the family to the community to the nation.

It’s so important to understand this, because sometimes in our culture religiosity feels more like an abstract assertion divorced from daily life, a box you check on your social media profile—I’m a Presbyterian, I’m an atheist, I read Tarot cards—but other than that our lives look almost exactly the same.

In antiquity, to worship one god over another meant something central about your life and core identity. The way you lived was different based on which god you worshipped. What you ate. How and when you worked—the God of Abraham, Isaac, and Jacob demanded the people take a day off once a week, if you remember. How you treated one another. Even something as intimate as circumcision was decided by it.

So back to our story and Joshua talking to the people. And he’s saying, “Turn away from these other gods! You’re Israelites! You worship OUR God!”

I want to ask you: What could possibly be so alluring about these other gods that Joshua had to keep reminding the people to turn away from them? Didn’t they understand that their very identity was dependent upon their relationship with God?

Again, put yourself in their shoes.

Because, you see, the God of Abraham, Isaac, and Jacob was different from the surrounding gods—in a way that the Israelites didn’t always seem to appreciate.

With the surrounding gods, you worshipped them to get things from them. So, like, if you needed a good harvest, you would do a sacrifice to the harvest god, who might fight off the sun and wind gods that might bring drought to make sure your crops grew. If you needed a military victory, you would do a sacrifice to your military god to ensure you’d be triumphant over the competing military gods. You put up statues of gods in your house to protect your home from the other, competing gods running around out there.

The God of Abraham, Isaac, and Jacob wasn’t like that. This God had revealed that he was the creator of the entire universe – not one of many gods competing for control, but the one and only God who made the world and everything within it. This God was invisible – in fact, to make images of God was forbidden – so you couldn’t see him like you could the statues and the golden calves. You couldn’t control this God. You couldn’t do a sacrifice here or a ritual there in order to assure a good harvest. This God demanded complete and total loyalty, while at the same time claiming complete and total sovereignty to do as he saw fit.

And, if you’ll allow me to say something shocking, sometimes the people felt that this God wasn’t very good at his job.

I mean sure, he delivered the people from slavery, but why did he let them be enslaved in the first place? And, sure, this God gave them the promised land, but why did it take so dang long to get there? And even since then, the children of Israel have always lived a precarious, persecuted existence, at the whim of the major empires that have occupied them, scattered them, and sought to annihilate them.

Most egregiously, this God loved his people. Like, really loved them. Not an abstract, disconnected sort of love that we might imagine from a detached, passionless, only-semi-interested power from on high, but a deeply attached, passionate, fiery, burning love. A jealous love. A love that cares about the outcomes. A love that wants relationship and is hurt—hurt!—by rejection. Can you imagine? A God whose people can hurt his feelings by rejecting him or treating one another poorly? What kind of God is that?

No wonder there were people who wanted to worship those other gods, instead of the God of Abraham and Isaac and Jacob. No wonder.

And so Joshua says to the people: “Choose this day whom you will serve. Is it their gods, or our God?” Because everything was riding on it. Absolutely everything. Who they were, in their core identity, was inextricably bound up with Whose they understood themselves to be.

You know, it strikes me…after doing all this imagining about what it must have been like for them…it’s not as if we aren’t confronted with this choice ourselves.

Oh sure, we don’t call them gods. We lie to ourselves about that. We imagine ourselves too sophisticated to fall for myths. But in the process, we misunderstand that our own divided loyalties are every bit as dangerous as the ancient Israelites’ were.

When we’ve been wounded…how often do we sacrifice to the god of vengeance, to get back at those who hurt us?

When we feel afraid of changes in our country and world…how often do we sacrifice to the god of polarization and hostility, so that we can write off our neighbors with whom we disagree as “other”—not quite like us—instead of getting to know and love them for who they are?

When we’re numb and bored…how often do we sacrifice to the god of meaningless sex or excessive substance use, so we don’t have to feel the emptiness?

When we’re envious of our neighbors…how often do we sacrifice to the god of consumerism, to make ourselves appear better than we feel we are?

When we feel out of control…how often do we sacrifice to the god of power, strength, and coercion, to get our own way?

When we don’t actually believe that God is loving…how often do we sacrifice to the god of false identities, and find our primary worth in categories like race, class, gender, sexual orientation, political persuasion, or nationality, instead of in the most important identity of all: Child of God?

When we don’t actually trust that God is God…how often do we try to become gods ourselves?

When you think about it, we’re not all that different from the ancient Israelites. We too are tempted by the gods of our neighbors and our ancestors.

Because, ultimately, who and what we worship drives everything about our lives just as much as it did theirs. Just because we don’t call it a god doesn’t mean it isn’t one.

Hear this, my sisters and brothers in Christ: your god is whatever you turn to first to find meaning, identity, and purpose.

Your god is whatever you turn to first to find meaning, identity, and purpose.

And if that isn’t Jesus Christ, crucified and risen, you are worshipping at the altar of an idol.

But there is good news.

In our text today, Joshua says, “Choose you this day whom you will serve!” And yes, we need to examine our lives and discover who or what we’re really serving, and pray to have our hearts turned back to the true and living God.

But that loving God—the one who is passionate and jealous and hurt by our rejection—has chosen us. This is the entire thrust of scripture. He chooses the people, and they reject him, and he chooses them again. In fact, he chose us so deeply, so profoundly, that he became one of us. And on the cross, his arms outstretched, he is choosing us again and again and again and again, going even so far as into death itself, so that he can break the power our idols have over us, and be installed as the true Lord and God of our lives and the world.

May we let him do so.