Because Jesus is king, we do not need to be afraid. 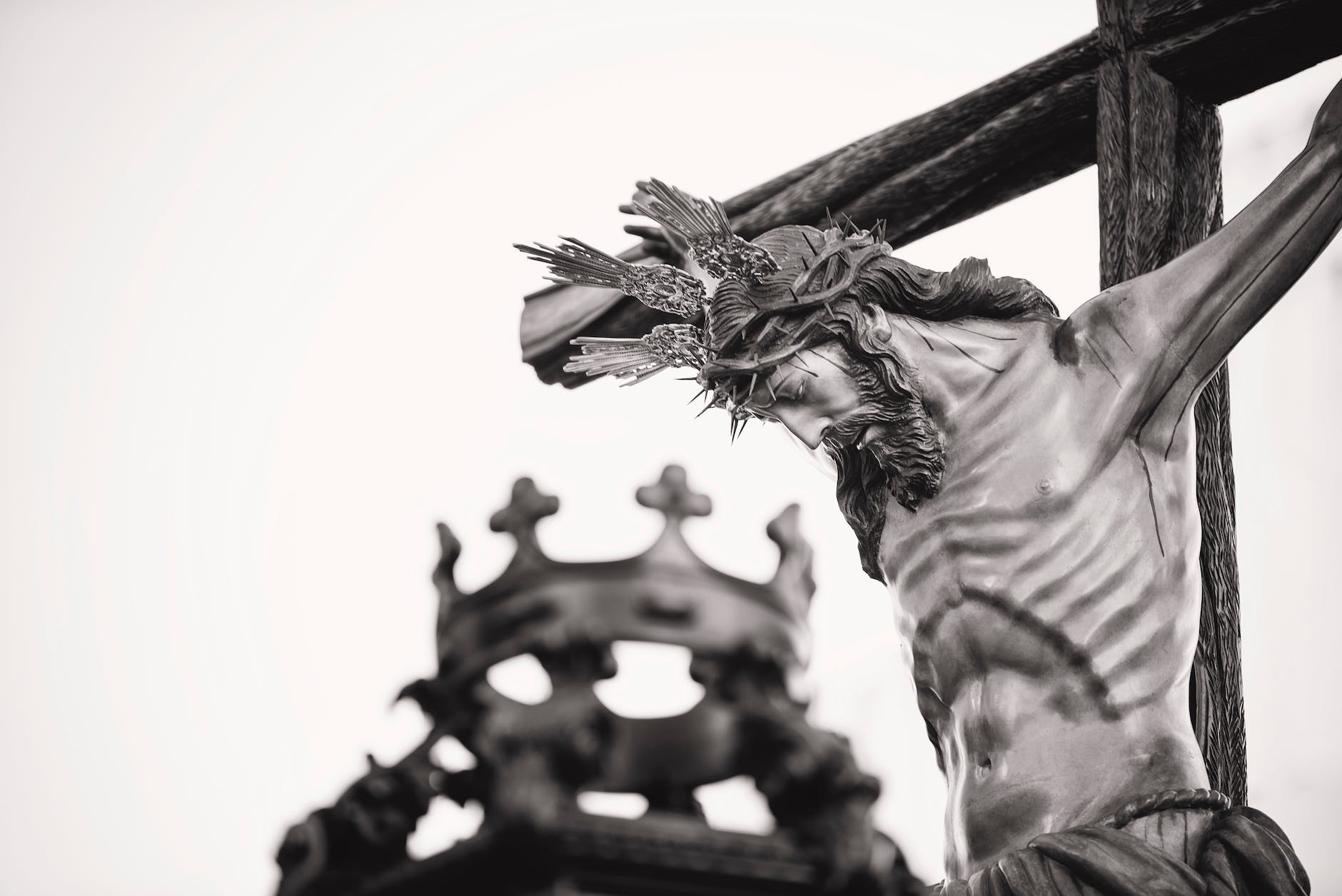 And Pastor Joe has pointed out, quite insightfully I think, that the Bible is different from a lot of national histories because the Bible isn’t afraid to point out the significant flaws and failures of its founders and leaders. We know, for example, that Abraham and Isaac lied about their wives being their sisters (ew), and Jacob was a trickster, and Moses killed that Egyptian, and David was an adulterer and murderer, and Solomon ended up in idolatry.

And there’s a reason the Bible does this: because, ultimately, the Bible isn’t interested in glorifying its heroes.

To put it another way: the Bible is unflinchingly honest about the foibles and failures of its so-called heroes because the biblical writers never want you to read it and be tempted to think that anyone other than God gets the credit.

You can’t read the Bible and say, “Well, clearly Abraham was chosen for his honesty, or David for his moral character, or the kings for their righteousness.” No, the Bible makes it clear that the source of blessing and endurance is God and God alone—in spite of the sins and failings of the people.

God is the powerful one. God is the ruler. God is the king. And the extent to which the Israelites remember this, things generally turn out better for them. When they attempt to take matters into their own hands—well, if you’re anything like me, I think you can probably say that you know from sad experience how such things tend to go.

Before I go any further, I want to be clear that when I talk about God in such terms as power and rulers and kings, I am NOT saying that God does the things we traditionally associate with this kind of worldly power. You know what I’m talking about: violence, coercion, force, manipulation, exploitation, and brutality.

This is a vitally important point. Think of all the harm that has been done the world over by misunderstanding this. To say that God is king does not mean that as long as we are violent, coercive, forceful, manipulative, exploitative, and brutal in the name of God, it’s all okay. From Crusades to Jihads to the Mountain Meadows Massacre that occurred just a few miles from here, this fundamental misunderstanding has been the source of some of the world’s most horrific atrocities.

We must not blaspheme God by attaching God’s name to such evil. Instead, what today’s text is challenging us to do is to completely reimagine what we understand power to be.

And I’ll warn you in advance, it isn’t particularly intuitive. The reimagining we’re being asked to do by this text and by our Christian faith is so foreign to the way most of us have been typically raised to think about things that it can be jarring to wrap our minds and hearts around it. But by God’s grace, I believe we can begin to see as God sees.

And so, back to the text.

It starts with the story of an invading foreign empire, Assyria, which has captured all the cities of the kingdom of Judah with the exception of one: Jerusalem, the capital.

And the king of Assyria sends a messenger to Jerusalem, who says, essentially:

“Listen up, people! Stop trying to resist us. Your king might try to convince you to rely on your God, but don’t believe him. How well did that work for all the other nations we’ve conquered? Your only chance is this: surrender to us, and we’ll ensure that you live in peace. We’ll give you land and trees and homes—good paying jobs, and the opportunity to eat and work and live. We can provide for you so much better than your God can. All you have to do is surrender.”

It actually doesn’t sound all that bad. Who doesn’t want a home and a yard and a job?

So you can understand King Hezekiah’s response. He is terrified and in despair. He turns to the prophet Isaiah and says, “There is no hope! Please pray for us!”

And Isaiah, unflinching in his faithfulness to God, replies: “Do not be afraid.”

Which, honestly, is kind of absurd.

Do not be afraid?

Do not be afraid, even though there’s an armed empire breathing down our necks?

Do not be afraid, even though we’re surrounded?

Yes, Isaiah says, do not be afraid, for God will take care of us in ways we won’t even be able to believe.

Which is what happened.

Assyria sieged but was unable to capture Jerusalem. The historical record is unclear as to exactly why. What is clear is that Isaiah was able to urge fearlessness in the face of imperial power because he had an alternate vision of a kind of world that was ordered by the peace of the Lord.

Indeed, Isaiah painted a beautiful picture of the nations:

Many peoples will come and say,
“Come, let us go up to the mountain of the LORD,
to the temple of the God of Jacob.
He will teach us his ways,
so that we may walk in his paths.”
The law will go out from Zion,
the word of the LORD from Jerusalem.
He will judge between the nations
and will settle disputes for many peoples.
They will beat their swords into plowshares
and their spears into pruning hooks.
Nation will not take up sword against nation,
nor will they train for war anymore.

These are beautiful words. But if you aren’t careful, you might almost think it resembles the promise the Assyrians made. Follow us, and you’ll have your own land. Follow us, and you will turn your guns into roto-tillers and your bombs into gardening shovels. Follow us and you won’t have to train for war.

Isn’t this the same pie-in-the-sky promise that every powerful entity makes?

How on earth can we tell the difference?

I submit that we can tell the difference by asking this important question: what lies behind the promise?

God, on the other hand, backs his promise…with God’s own suffering.

When we declare that God is king, this is what we mean. To fulfill his promises, God refuses to use the tools of imperial power.

Fundamentally, this is why God became human in Jesus of Nazareth. There is a reason we call Jesus the Messiah! Remember what Messiah means—it means Anointed One, it means King.

In Jesus, God becomes King of the entire world, and he does it not by overthrowing his enemies violently, but by accepting his enemies’ violent attempts to overthrow him.

Instead of overpowering with brutality, as the powers of the world do, in Jesus, God becomes king by absorbing the brutality of the world into God’s own self, in order to utterly transform it.

Instead of inflicting suffering, as the powers of the world do, in Jesus, God becomes King by joining us in our suffering.

Instead of punishing his adversaries with torture and shame, as the Romans did with crucifixion, on the cross, God becomes King by taking this brutal symbol of coercion and violence and re-rendering it as the ultimate symbol of love, solidarity, and self-giving.

And, if I may, this act of profound love by the creator of the universe transforms the very cosmos. That is to say, all acts of brutality and harm have been revealed as false power, and will ultimately be rendered useless and utterly impotent.

Because Christ is King, we can be sure that the real power that governs the universe is LOVE—self-giving, self-emptying, self-sacrificial love that seeks the welfare of the neighbor, that forgives, that restores, that heals, that lives.

Friends in Christ, we are still surrounded by Assyrian-like threats. There are powers and principalities that seek to rule through force, and even promise false peace in the process.

Do not be fooled.

The empires of the world have risen and fallen. Not one of ancient Israel’s foes remain. But God’s promises, backed by God’s own self-sacrifice, continue—and through Jesus’ kingship, we look forward to a world in which our guns and our bombs and our swords and our spears go the way of all the other false powers, and we are left to rest in hope and peace and joy.

Because Jesus is King, we do not need to be afraid.

Join 60 other subscribers
PrevPreviousChoose You This Day
NextLight One CandleNext