Enter into Fear: Christian Blessing in a Time of Pandemic

For centuries, Christians have been at the forefront of caring for the sick and dying—yes, even in the middle of pandemics. 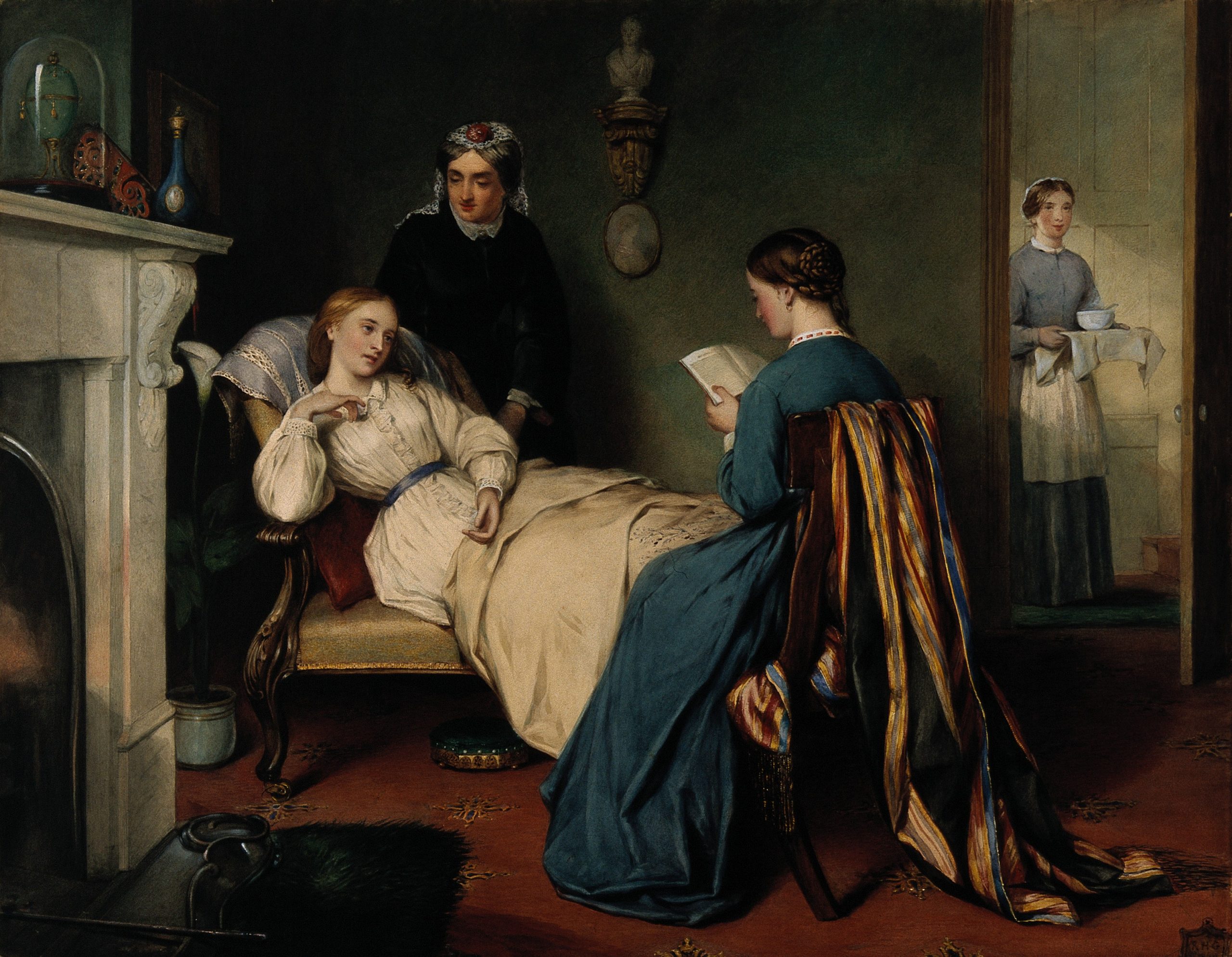 Question: is anyone else feeling kind of scared right now?

There are all kinds of things to be scared of.

Death. Illness. Financial instability. Running out of toilet paper and having to resort to—extreme measures.

It’s okay to be afraid. Did you know that? It’s okay to feel what you feel. Those nightmares about what happens when you pull the final square off the TP roll…they’re 100% real.

But in the midst of the fear, and by the grace of God, my goal today is to be able to offer a word of hope.

Not a naïve hope that comes from ignoring things that are legitimately frightening, but a deeper hope that is born out of facing our fear, acknowledging it, entering into it directly.

So today, together, in the virtual company of friends, let’s enter fear directly and see what’s there.

We are not the first people to face a pandemic. In fact, in the ancient world, without the scientific and technological advances of the last century or so, pandemics occurred with alarming regularity.

What do you think was the most common response?

Of Roman times, historian Howard Haggard says, “When pandemics broke out, the Romans often fled in fear and left the sick to die without care. The Romans saw helping a sick person as a sign of human weakness.”

Sick people were often ostracized, stigmatized. They inspired fear and hatred. They were avoided, left to themselves because they were weak. Dispensable.

I want to stop here and say, there is a certain logic in this.

There is a certain logic in saying to a person with an infectious disease, especially in a time with no doctors, medications, or cures, STAY OVER THERE, EVEN IF IT MEANS YOU DIE ALONE.

You could almost even make a moral case for it.

You could say, the greatest good for the greatest many; we must sacrifice the weak for the benefit of the rest of us; it’s unfortunate, it’s sad, but as a society, our survival is at stake and it’s a terrible and difficult call we have to make.

Enter into the fear: see it. Like walking into a dark haze. Who’s here? What do we see?

The sick and dying.

Each person for him or herself. Survival of the fittest.

The logic is clear, the call seductive: Run away from the source of danger. Run far, far away, and live to fight another day.

You know who resisted an impulse such as this?

A strange, small countercultural group that emerged in the shadow of the Roman empire, called Christians.

These were very odd people. They were actually known as atheists because they refused to worship the pantheon of Roman gods and instead worshipped just one God, invisible and all-powerful, who had been revealed in a peasant named Jesus.

These Christians, if you can believe it, said that Jesus—a nobody from a backwater town called Nazareth, who had been executed by the Roman state in the most humiliating way possible for treason—was the deepest, most profound revelation of this all-powerful God the world had ever seen; even the incarnation of this God himself.

It was ludicrous, of course. As if any self-respecting god would allow himself to die.

But it did make them different. Because these Christians worshipped this strange god who died upon a cross, they had a moral code that flew in the face of the Roman Empire’s.

You see, when pandemic struck, instead of running away from the sick and the dying, they ran toward them.

While Roman authorities fled outbreaks, Christians entered the homes of those infected, tended to them, cared for them—whether they were Christians or not.

They entered the fear, the dark, terrifying haze, and you know what they saw there?

They entered the fear and Jesus was with them there, and because of that, they didn’t turn away.

Do you know what came out of that?

Modern nursing and hospitals owe themselves to the radical ethic of care embodied by these early Christians. Without them, we would not have our modern healthcare system. We would not have the inherent value of every life as a principle our society attempts, albeit not always successfully, to honor.

You know what else?

Even though some of these caregivers died as a result of their selfless ministry to those most vulnerable, Christianity spread like wildfire.

People were astonished at the depth of love that could produce such radical care—and they wanted to be a part of that.

They saw the beauty of a life lived for the sake of the neighbor—and they wanted it for themselves.

This Lenten season, we’ve been talking about everyday gospel rhythms, in which we explore ways we live out our discipleship to Jesus Christ each day.

Today’s rhythm is BLESS. As Christians, we are to bless and be blessed by others.

But what is the nature of this blessing?

These are blessings indeed, and to the extent we have them, we are called to share them.

But the heart of Christian blessing is much more radical.

Jesus says it himself in today’s gospel reading:

“But to you who are listening I say: Love your enemies, do good to those who hate you, bless those who curse you, pray for those who mistreat you.”

It’s easy to love, do good, bless, and pray for those whose existence are convenient to us, or who benefit us in some way.

“But love your enemies, do good to them, and lend to them without expecting to get anything back”—this is what it means, as Christians, to walk in the everyday rhythm of BLESS.

To bless the people who don’t “deserve” it.

To bless the people who can’t pay us back.

To bless the people who don’t contribute to our economy.

To bless the people who are sick or might otherwise pose a threat to our physical or financial wellbeing.

To bless those most on the margins, most unable to care for themselves, most hated, most reviled, most feared.

Just like the early Christians who cared for the sick in time of pandemic, even at great personal risk to themselves.

Oh, my sisters and brothers in Christ, you’ve probably heard that we’re blessed to be a blessing, and it’s true.

But do not misunderstand the nature of Christian blessing.

Our blessing is nothing more or less than that which occurred in our baptism, when we were baptized into death of Jesus Christ—in order to be raised to his new life.

Our blessing, therefore, it is to die daily to ourselves and to our own self-interest, so that we can run toward our neighbors—especially the most marginalized—for so did Christ.

Does it sound scary?

But the truth is we’re already here.

By virtue of our baptism, we have already entered into fear, into death itself, and here we have discovered the most glorious secret:

God is with us in it.

This is the meaning of the cross of Jesus. And during Lent, as we journey toward the cross together, there is no better time to remember it.

And so, sisters and brothers in Christ, always remember:

When we stay at home to avoid spreading the disease to others, we are blessed to be a blessing, and Jesus is there.

When we worship online to show solidarity for those most at risk, we are blessed to be a blessing, Jesus is there—he is here, on this livestream.

When we find ourselves in the midst of sudden unemployment or economic disruption, because businesses are closed in order to preserve the lives of others, we are blessed to be a blessing, and Jesus is there.

In the doctors offices, in the emergency rooms, in the ICU’s, in the drive-through testing centers, where brave women and men put themselves at risk day after day, we are blessed to be a blessing, and Jesus is there.

When a delivery driver brings food, when a grocery store worker restocks the shelves, when a caretaker looks after children so that essential workers can work, we are blessed to be a blessing, and Jesus is there.

And when we are sick and alone and uncertain and afraid, we are blessed to be a blessing, and Jesus is there.

This morning, I invited you to enter into fear, to see what’s there.

But look closer, through the darkness and the haze. What do you see?

We are not alone, for he is with us.

Join 60 other subscribers
PrevPreviousIs This What You Think I Want?
NextGoing On: A Play in One ActNext