On Wells and Worrying 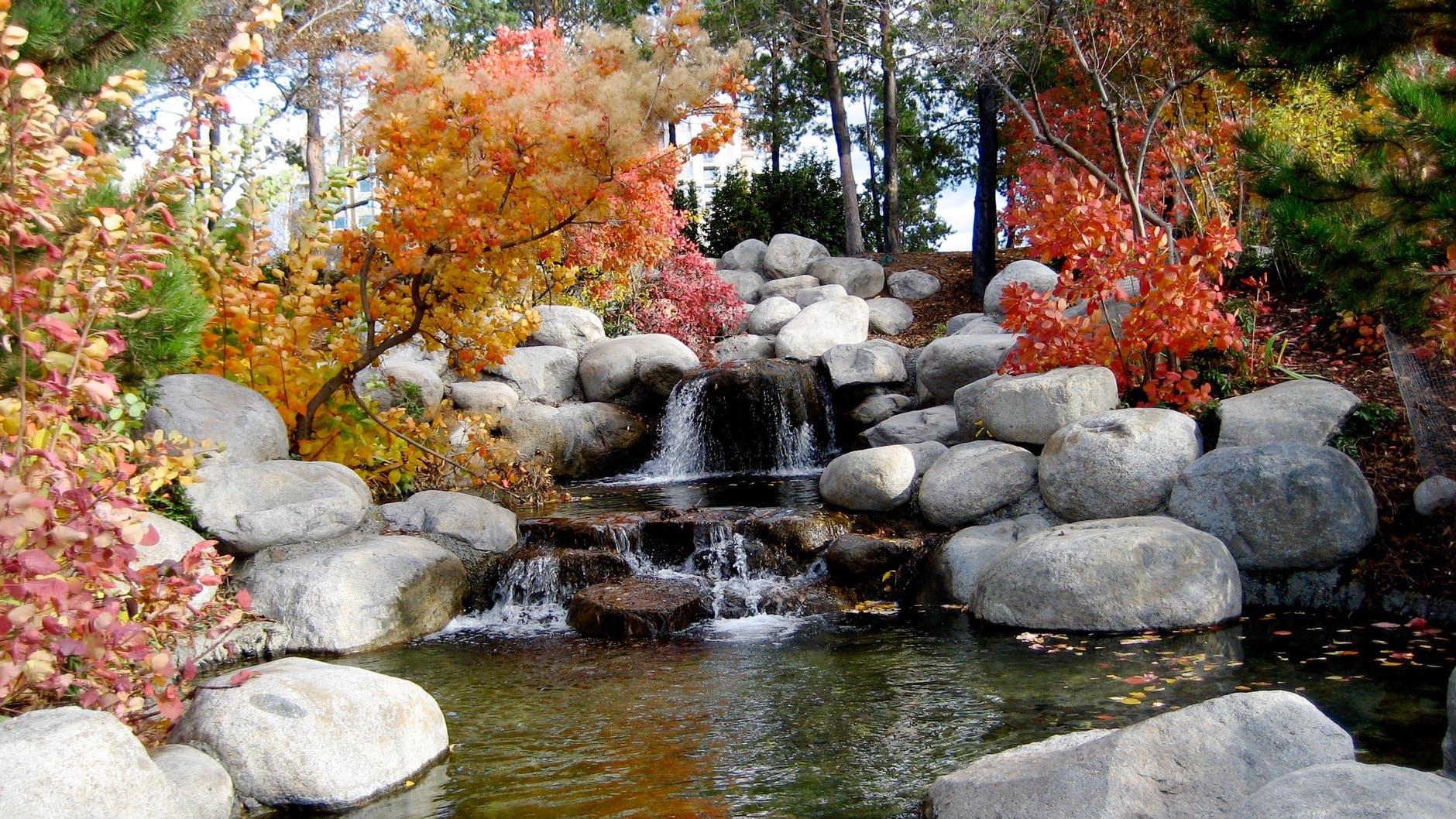 This is a sermon I preached at House of Mercy in St. Paul on May 7, 2017. The text of the sermon follows the audio below.

“’Last forever!’ Who hasn’t prayed that prayer? You were lucky to get it in the first place. The present is a freely given canvas. That it is constantly being ripped apart and washed downstream goes without saying.” -Annie Dillard, Pilgrim at Tinker Creek

I saw an article recently that said that half of Millennials believe the American dream is dead.

I must confess I was surprised to see that statistic—only half? At 35, I’m on the upper boundary of the Millennial spectrum, but I don’t think I know anyone my age or younger who’d say it’s alive and well.

There’s a decided distrust of traditional institutions in my generation—a suspicion and sometimes hostility that pervades everything. According to the Pew Research Center, Millennials are the least likely of any generation to be affiliated with a political party, to identify as religious, or to enter the institution of marriage—when compared to older generations at the age that Millennials are now.

They’re distrustful of leaders. They’re saddled with debt. And they’re the first generation in American history to say that the world they’re inheriting is worse than the ones their parents did.

And maybe this is just my signature Millennial mistrust shining through, but I don’t think they’re wrong. Every day, our politicians make promises they can’t keep. Our parents told us that hard work and dedication are all we needed to achieve anything, but that hasn’t proven true. We’re the most educated generation in history—we went to college in droves, because they told us that’s how we’d make a living—and we came out the other side with mountains of student debt and few job prospects in a struggling economy.

In today’s reading, the Israelites are encountering a similar moment of disillusionment. They’ve been wandering in the desert for decades, and now their water supply has dried up, threatening their livestock as well.

It’s a serious predicament. After all, water is life.

“Would that we had died!” the Israelites say when they see what has happened. To Moses, their prophet and liberator, they complain: “Why have you brought us up out of Egypt, to bring us to this awful place? Our livestock die here. It is no place for grain or figs or vines or pomegranates; and there is no water to drink.”

They were promised a land flowing with milk and honey, but after years in the wilderness, the Exodus Dream is dead, and there seems little hope to restore it.

The midrash tells us that the water was directly connected to Miriam, Moses’ sister and a powerful prophet in her own right. Miriam possessed a porous stone that would roll along with the travelers, and every night when the Israelites made camp, so the midrash says, it would gush forth 12 streams of water—one for each of the tribes. It was called Miriam’s Well. But upon Miriam’s death, as recorded at the beginning of today’s reading, the Well stops working—and so, according to the midrash, Miriam’s death is cause of the drought the Israelites are experiencing.

In some of the commentaries, Miriam’s Well is connected with the gift of manna. Manna, of course, is the edible substance that God provides for the Israelites in the wilderness, a miraculous food that replenishes every morning. There are conditions attached: you can only gather what you need for the day; if you attempt to hoard it or store it up, it grows worms overnight and spoils.

And so here you have the story of God’s miraculous provision for the children of Israel: both their food and their water supply were provided by God. And for both their food AND their water, they were given enough each day for that day’s needs. They couldn’t store it up, but were to accept today’s gifts today, and trust that tomorrow’s gifts would come tomorrow.

This has profound resonances with Jesus’ teaching in the Sermon on the Mount, who very well might have been thinking of these stories when he taught as recorded in the gospel of Matthew, the sixth chapter, “Therefore I tell you, do not worry about your life, what you will eat or what you will drink, or about your body, what you will wear. Is not life more than food, and the body more than clothing? Look at the birds of the air; they neither sow nor reap nor gather into barns, and yet your heavenly father feeds them. Are you not of more value than they? And can any of you by worrying add a single hour to your span of life? … So do not worry about tomorrow, for tomorrow will bring worries of its own. Today’s trouble is enough for today.”

I don’t know about you, but for me anyway, this is almost impossible. I am a worrier. I LOVE to worry. I don’t love the way it makes me feel necessarily, but I do love the way it gives me some illusion of control. Well, not control exactly, more like: preparation. If I can just imagine enough scenarios of how everything could go completely to hell, then chances are good that at some point at least one of them might come true—and then at least I’ll be, you know, ready for it.

The trouble is, I don’t think I’m alone. I think that in many ways our entire culture, our entire society, might just be built on anxiety—on those shifting, hazy what if questions that never really have an answer, but that consume our imaginations anyway. What if the wrong people come to our country? Build a wall! What if they attack us? Attack them first! What if I’m not enough? Buy more things! What if I get lonely? Swipe right!

Yes, we build, attack, spend, swipe, rage, and hoard in order to keep our anxiety at bay. In the United States, it is estimated that between 30%-40% of the food supply is wasted. That’s 60 metric tons of food each year. According to the Waste and Resources Action Program, a British anti-waste organization, the food we waste in the west could feed all 870 million of the world’s starving people.

How would it change how and what we build, the decision to attack or seek peace, on what we spend our money, with whom we engage in community, and when and how much we give of our abundance? What if our very understanding of abundance were changed, from excess to enough? Wouldn’t that change everything?

Understood in this context, God’s provision for the Israelites with manna and Miriam’s Well, and Jesus’ command not to worry is not just about avoiding unpleasant feelings of stress and anxiety. It’s not a mere psychological cure for the restlessness and vapidity of western consumer culture. It’s an entire social revolution.

It is the very heart of the Gospel. That in relinquishing to God our need to control and manage our anxiety—which is only ever an illusion anyway—we are caught up in the overflowing abundance of God’s grace. A grace that follows us in the wilderness of our lives, like a porous rock that rolls alongside us, and every night gushes forth enough, more than enough, not only for us, but for everyone.

What if our society were built on that instead of the petty fears and anxieties that consume us?

Maybe there’s a reason my entire generation has become disillusioned. We were taught to trust in the American Dream when we should have been trusting in God’s Dream. As nice as it may be, the American Dream is far too narrow and far too shallow to even begin to hold a candle to the thirst-quenching abundance of God’s love.

The response of Moses and Aaron to the disillusionment of their people is telling. When the drought comes, Moses and Aaron fall on their faces before God. Would that all our leaders might do something similar. The glory of the Lord appears to them and instructs them to command the rock to yield its water. Moses strikes the rock twice, water gushes forth, and the Israelites’ thirst is relieved.

Yes, this is a God whose graceful provision we can rely on. Our God, the rock, the bread of life, the living water, is with us. To satisfy our needs, God gives God’s very self to us. Let’s take and eat and drink.

Hope, and Where to Find It